London / Hangzhou, July 16th, 2019 - Xiami Music, a wholly-owned entity of the Alibaba Group, will be the first music streaming service in China to adopt MQA.  With the implementation of MQA, Xiami Music will become the audio quality leader in China, sending a clear signal to artists and creators that Xiami’s service is the best way to connect with their fans.

MQA, the pioneering technology delivering authenticated master-quality music in a file small enough to stream, will be introduced into the SVIP tier of Xiami Music iOS and Android apps.  All users will be offered a free trial for a limited period, and can then subscribe to the SVIP tier to continue to access all MQA music.  MQA’s technology enables the highest quality playback of the original recording on all devices – from smartphones to high-end home audio systems.  China is already the fourth largest market for sales of MQA devices, even before the existence of a domestic MQA-enabled music service, so this partnership is set to further boost sales of partner products.

Xiami Music began as a start-up and has maintained a culture of innovation and creativity, with a reputation for supporting independent artists and respecting sound quality.  The streaming service has an intelligent AI recommendation tool, while music fans actively engage to encourage music discovery; the platform has attracted over 40,000 independent musicians, and its library contains over 500 million playlists and 20 million songs.

Long Yang, Director of Xiami Music said, “We are very proud to be the first music service in China to offer MQA, as we continue to push the technological boundaries in pursuit of improved sound quality to benefit our music fans and all musicians on our platform.”

Mike Jbara, MQA’s CEO, added, “MQA is a consumer-centric technology company, driven by a commitment to deliver the master recording all the way through to the music fan, wherever and however they choose to listen – and it was clear from our first meeting that the Xiami team shared our vision.  Many of MQA’s current device partners have successful and growing relationships within Alibaba’s e-commerce businesses, so this collaboration is the perfect platform on which to create a complete MQA ecosystem for the Chinese consumer market.”

Xiami Music was founded in 2008 and acquired by the Alibaba Group in 2013.  Alibaba Group owns market-leading e-commerce platforms in China, which attract 654 million annual active consumers, including a growing entertainment business known for connecting with consumers of all ages.  As part of Alibaba’s ecosystem, the Xiami Music service has access to Alibaba’s full resources, including all the latest technology and music entertainment insight from across its Taobao, Tmall, Alipay and Youku platforms.

In a relatively short period, licensed music streaming services such as Xiami Music have revitalised the Chinese recorded music market, which now ranks seventh in revenue terms internationally.  In terms of music streaming income, China is the fourth largest global market, behind only the US, UK and Germany.* 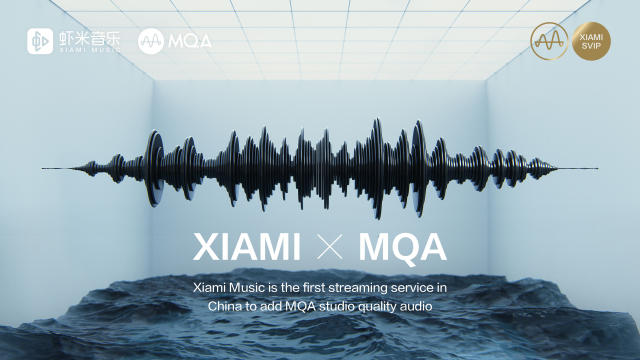